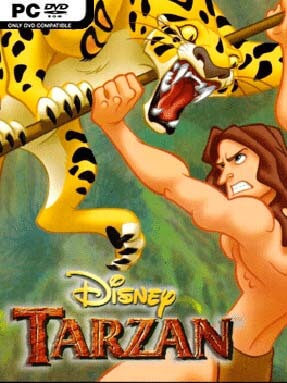 Upon the release the game received positive reviews. The game was praised for it’s ahead of it’s time graphics and the fact that the game stayed true to the story of the film. Due to the game simple gameplay and concept, it prove to be very appealing among the younger generation specially kids. If you were ever a fan of the film, I am pretty sure you would love playing this game. Download the game now for free on windows(7,10).

The game is based on Disney’s animated film Tarzan. In the game players take the role of a super human who has developed many unknown abilities to a lay man. Tarzan who is raised by the jungle animals like gorillas, was just a young kid when he was abandon by his parents. Living and raised by animals, Tarzan has learned the traits of animal kingdom, like climbing, jumping and running fast. Tarzan has to survive and fight against animals, from leopards to baboons to monkeys, as well as Human hunters like Clayton.

Disney’s Tarzan is 2D platform game, with the player able to move from one plane to another giving a sense of 3D environment. The player takes the role of, Tarzan, a human with animals like instincts and moves. The gameplay shows Tarzan both as a child and as an adult. Tarzan is full of powers, which no ordinary human can have. For example Tarzan is able to open or break certain object just by slamming the ground. Being raised in the jungle Tarzan knows every inch of his territory and the hidden items and areas within the jungle.

Player will have a variety of different weapons and techniques to deal with the enemies. For example Tarzan’s jumping, climbing and running come in handy in defensive modes. To attack the enemies players will have throw fruits at his enemies. Fruits can be thrown both overhand and underhand depending on the distance from the enemies. Knife used in close combats, spear and parasols are other weapons, which are exclusive to certain levels of the game. There are a total of 14 levels. Players’ health is represented by a life bar, which depletes as players take damages. Health bar can replenish by eating bananas. Bananas are found in the banana trees and other areas during a certain level.

Secrets of the Jungle

To earn an extra life players will have to collect 100 coins. There are various other collectable items, that the Players can find through out the level. For example collecting four pieces of pencil sketches unlocks bonus level for the players. Players can also unlock scenes from the respective film by collecting and locating a 6 letter word,     T-A-R-Z-A-N.

The main antagonists in the game are eagles, baboons and monkeys. leopard(Sabor), snakes, bush pigs and some humans like Clayton. The game offer three difficulty levels, Easy, medium and hard. We will see, in the easy and medium level of play, Tarzan getting survival tips from his friend Terk.

How to Download and install Tarzan Game in PC?

Follow the following steps and you will be able to download and install Disney’s Tarzan on pc. 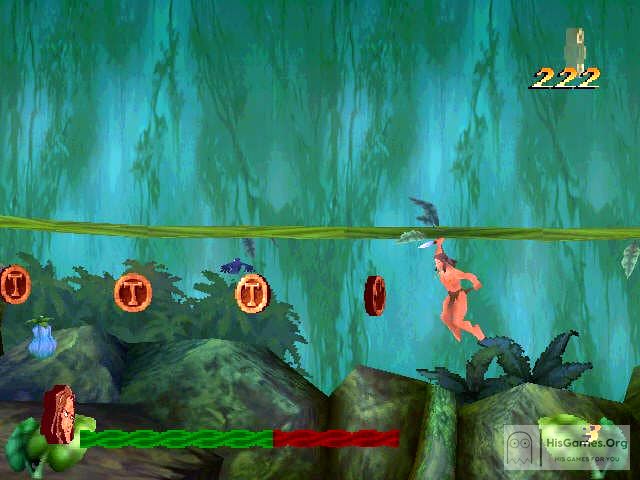