Age Of Empires 2 : The Age of Kings PC Download, is a real time strategy game. Age of empires 2 is the second installment in the age of empires series. Released in 1999, Age of empires is developed by  Ensemble Studios and published by Microsoft. The game was released for Microsoft Windows and MAC OS. The game is set in the Middle age with a total of 13 civilizations. Like the original Age of Empires, Player main aim is to collect resources, build armies, enhance the infrastructures and defeat their enemies.

The addition of new features and tweaks in the gameplay, accumulated global acclaim and praises. The game sold over 2 million copies in the first three months of it’s release, along with wining multiple game awards. When it comes to the list of best game of the twentieth century, with a doubt Age of kings will certainly be on the list. A Gold edition of the Age of empires 2 with 2000 expansion packs refer to as the The Conquerors, is considered as one of the greatest games ever made.

Age Of Empires 2 : The Age of Kings PC Download, Gameplay

The gameplay focuses on building infrastructures, accumulating resources and building armies for battle fields. The game consists of four ages(Dark age, Feudal age, Castle age, Imperial Age), through which the 13 civilization of the game has to advance through. As the player advances through these ages, with each age new units, technologies and new infrastructure unlocks. In order to do this, players must first upgrade certain buildings in the same age. This usually requires food and gold.

The work force for gathering resources are the villagers. The abilities of each gender is not dependent on their gender. Villagers are consider as the back bone of every civilization. The main focus of the game is enhancing different units. To do so player requires resources, hence the villagers. Player can upgrade their military unit’s weapons, armors and combat skill with these resources. There are four main resource food, wood, gold and stones. Players can gather food by farming, collecting berries, hunting animals, livestock and fishing. The main source for wood is trees. Trade and mining are the sources of gold accumulation. Stone mines are the source of collecting stones. Villagers store these resources in tower centers, mining camp and mills.

The game offers a proper barter system, where you can set up markets to trade your resources for other resources. Players can purchase upgrades, which speed up resource gathering. Player can also collect gold by sending their carts and cogs to foreign lands. Often return, these carts and cogs generates gold while adds to the gold collection of the players. The farer the foreign marketplace the more gold it brings back.

Age of Kings Offers five campaigns through different civilization. Each of these campaigns contain different objectives. The first campaign is  William Wallace, Celts. This campaign serves as tutorial for the players. It teaches the player the game’s basics and features. It shows the player how can gather resources, build infrastructures and use these resources to form armies, which can defeat their enemies. This campaign features  Wars of Scottish Independence against the English under King Edward I Longshanks. The second campaign is the Frankish Campaign. This campaign features the Hundred year war.

The Age of Empires 2 like the Original supports the multiplayer mode. This mode can be played over the the internet. Just like the original up to 8 player simultaneously can join in and play a single game. Player also play this mode of the game solo. This will include all the single game campaign as well.

FAQs About Age Of Empires 2: Age Of Kings

Can I play Age of Empires 2 for free?

Age of Empires 2 is free to play on different platforms including Windows. If you want to the game on your pc download the by clicking the link at the end of this article and enjoy Age Of Empires 2 For Free.

Is Age of Empires 2 still active?
The Age of Empires of series as a whole has gathered so much popularity that each of it’s additions has it’s fan base. As for the Age Of Empires 2 is still available to play and yes it is active and going pretty well.

System Requirements For Age Of Empires 2 : The Age of Kings PC Download 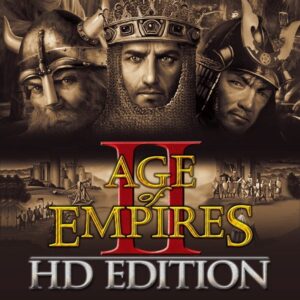