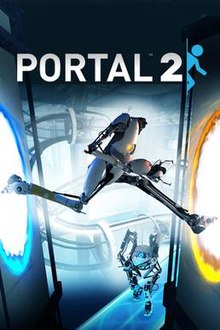 The basic theme of the game remained the same as Portal 1 or Original Portal. But something had to change. Portal 2 has added some new feature like,  beams, lasers, light bridges, and paint-like gels that allows the player to place the portal on any surface they desire. Apart from the previous character, Chell and GLaDOS new characters are also being added, like robot Wheatley and Aperture founder Cave Johnson.

Like it’s predecessor Portal 2 was universally acclaimed. Reason being it’s new user learning rate, dark comedy and story. It made it through the list of One of the greatest games ever made.

Aperture Science had designed these test chambers for experiments. They were trying to find out weather human test subject can survive and cruise through these detrimental test chambers or not. During these experiments GLaDOS an AI, kills all the facility staff and takes over the Laboratory. At the end of the first game, Chell destroys GLaDOS and escapes. But at the start of this game we see Chell is brought back by an unknown figure. Later in the game this figures identify as “Party Escort Bot“.

Like it’s prequel Portal 2 is a first person Perspective Puzzle game. Further Portal 2 has added a cooperative mode to it’s game play. In this mode of the game player take the role of one of the two robots, Atlas and P-Body. Single player mode remains the same, as player takes the role of Chell, a captive in the Aperture Science facility. Players can hold up damages up to a certain limit, cross that limit and player will die. Player’s character can also sustain a fall onto hard surfaces, but falling into a hazardous liquid or bottom less pits will kill the player instantly. In single player mode, player can restart the game from previously ticked check points. In a cooperative mode the robot respawn after some time and there is no need to restart the puzzle.

The main aim in both the modes though remains the same. Player will have to explore the facility and get hands on the secrets and loophole in the facility.

The initial levels of the game serve as tutorial for the player to get the hang of the gameplay. It familiarizes players with the basic controls and overall environment of the game. It also teaches about the what’s and how’s of the portal gun. Apart from that, player can learn how to create two connecting portals to teleport between them. Players will also learn, how they teleport operable items through the portals. In short these level are designed to make Players game ready.

Once the gameplay gets into the business end, player will come across more game elements. Some of these elements are there to facilitate players, while some will try and get the better of the players. Like Laser, tractor beam and Hard light bridges which a player can teleport through the portals. Player must avoid the Turret’s line of sight, if caught, it can be lethal.

Paint gel are these sloshy smooth substance, dispense from the pipes present in the facility. There are two colored paint gel, one is blue repulsion gel and the other is the white conversion gel. The paint gel can be transported through the portals. Surfaces or objects coated with it can be used by players to get to the cross surfaces more quickly. When a certain surface is coated with the blue gel, player can use it to get repulsion or bounce off the surface. The white colored gel is used to on surfaces which generally do not accept a portal, but with the white gel present on it, player can easily open a portal on to the surface.

Cooperative mode was highly demanded mode from fans of portal. This mode allows the player to team up in solving puzzles. Through proper coordination and communication player can time based puzzles. This timed puzzles were not included in the original or the portal 2 single player mode. Valve consider this mode of the game very competitive, as it requires combine action from both the player to the puzzle chamber. 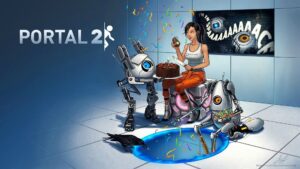